Tong Tong Fair is a famous, annual Asian festival, which takes place in The Hague, The Netherlands, from 28th May until 5th June 2016 This year, freemasonry and its historical lodge buildings are amongst the themes explored in the festival's exhibition, lecture and actvitities program. For more information, follow this link: tongtongfair.nl/vrijmetselarij/.

Posted by Stichting OVN at 3:18 pm No comments:

Our chairwoman, art historian Andréa Kroon, has for the last few years been working on a thesis with the title: Masonic networks, material culture & international trade. The participation of Dutch freemasons in the commercial & cultural exchange with Southeast Asia, 1735-1853. This project has recently been completed. Kroon will defend her thesis on 26 november 2015 at the Leiden University. More information is availale (in Dutch) in the online calendar of the university.
Posted by Stichting OVN at 1:38 pm No comments:

CMC to remain in The Hague

The Cultural Masonic Centre in the Hague has been closed to visitors since summer 2014 in preparation of an anticipated move to another location. A decision has now been made by the Order of Freemasons under the Grand East of the Netherlands to move its historical archive, library and museum collection from a building in the Jan Evertstraat to its new headquarters in the Javastraat in the same city. This brings an end to years of discussion and controversy about a new home for this important collection of masonic heritage.
Meanwhile, the CMC collection is participating in various digitalisation projects of the National Library in the Netherlands, which means more of the collection will be accessible online in the near future.
Posted by Stichting OVN at 11:21 am No comments:

14th International Symposium on the History of the Spanish Freemasonry

The CEHME (Center for Historical Studies of the Spanish Freemasonry) International Symposium on the History of the Spanish Freemasonry is taking place in the north of Spain, in Gijón, September 10-12, 2015. The symposium invites scholars to share their experiences and conclusions on the contextual framework of Spanish-Portuguese and Latin American Freemasonry. From Absolutism to Democracy. (1815-2015). Information: rehmlac.com
Posted by Stichting OVN at 11:11 am No comments:

Research network WEAVE (Western Esotericism in modern Art and Visual Culture) is a thematic network of ESSWE (European Society for the Study of Western Esotericism). WEAVE aims to be a a research network connecting scholars studying the interplay of heterodox spiritualties with Modern western art and visual culture. Scholars of all disciplines, interests, backgrounds and convictions are welcome. The phrase “heterodox spirituality” includes Western esotericism, occultism, occulture, mysticism, alternative Modern spirituality, and contemporary spiritualities. See the new website (which includes a conference agenda) for more information: networkweave.com.
Posted by Stichting OVN at 3:25 pm No comments: 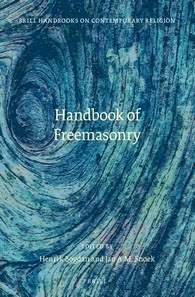 Last Wednesday, May 21, David Vergauwen was awarded a doctoral degree from Free University Brussels-VUB, with highest distinction. David Vergauwen is an historian, art historian and musicologist and graduated at Ghent University. He is a member of the Interdisciplinary Research Group Freemasonry-VUB.
His dissertation subject was "Où peut-on être mieux?" Muziek en muzikanten in de negentiende-eeuwse Brusselse vrijmetselarij. (The best place to be. Music and musicians in 19th-century Brussels Freemasonry.) Supervisor was professor Jeffrey Tyssens. The abstract to his dissertation can be downloaded here.
Posted by Stichting OVN at 3:27 pm No comments:

Study day for doctoral students on the history of Freemasonry 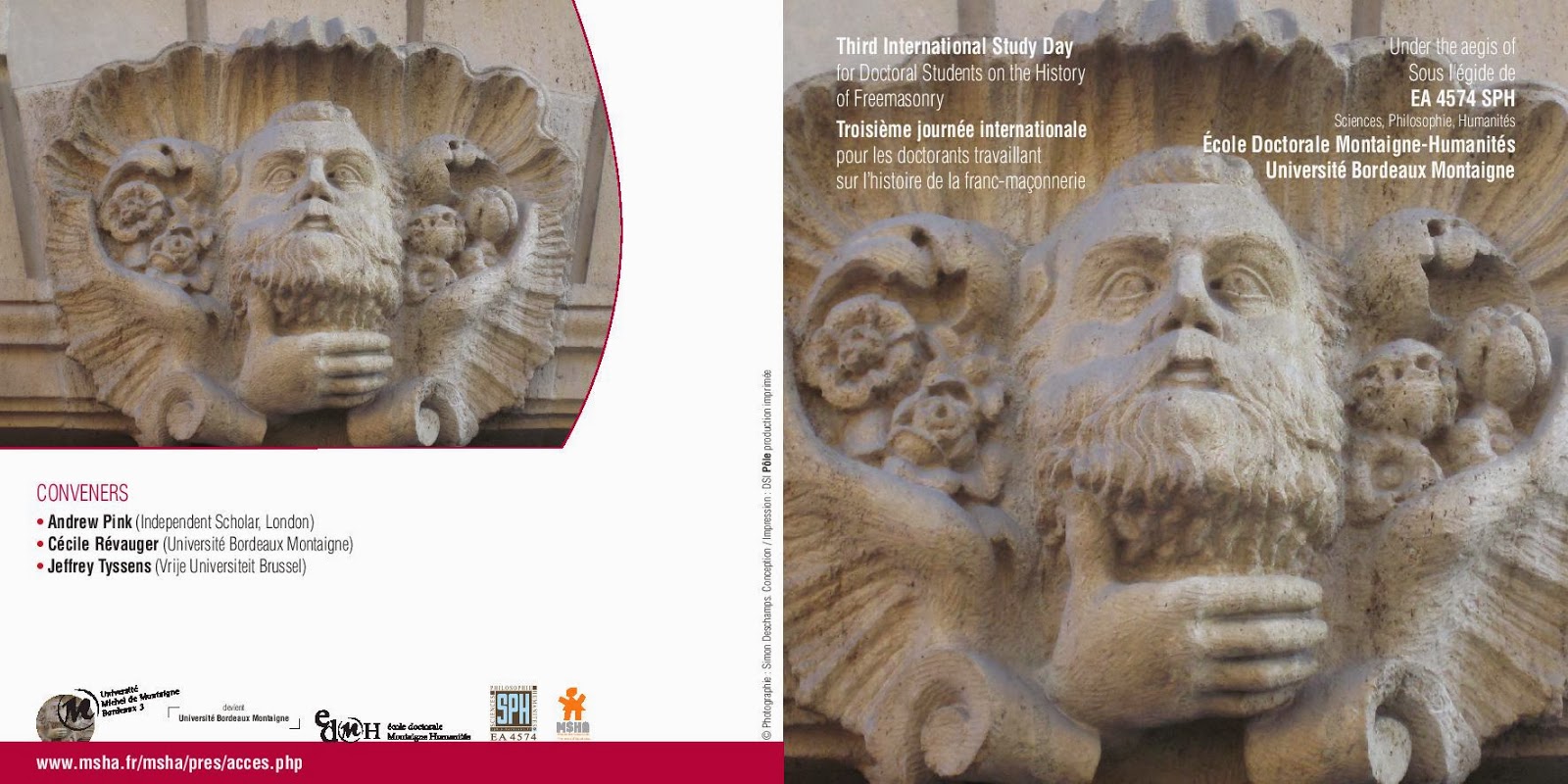 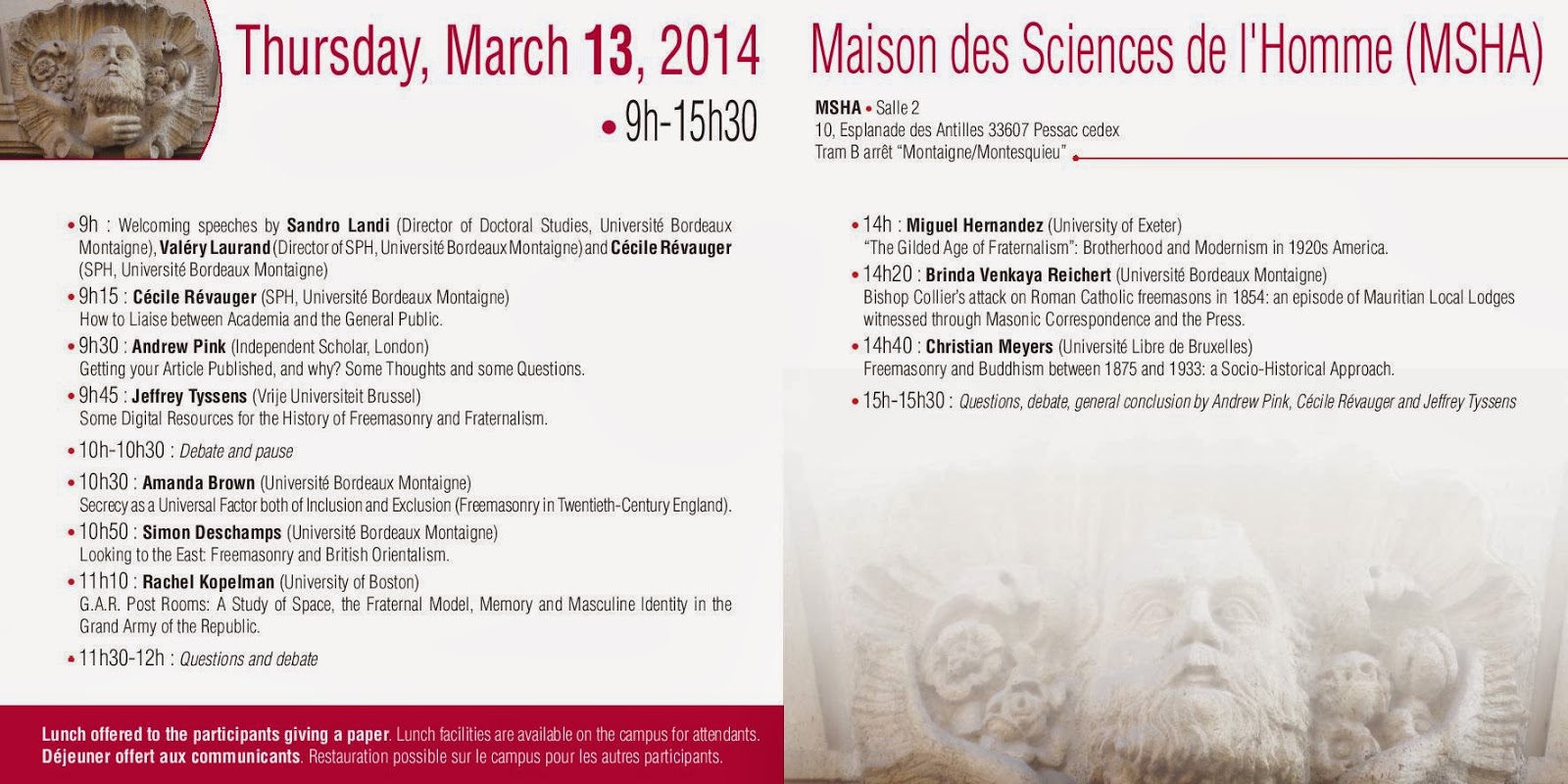 Posted by Stichting OVN at 1:57 pm No comments:

The next meeting of the American Academy of Religion will include, as has been the case for a number of years now, several sessions organized by the group for Western esotericism (co-chaired by Cathy Gutierrez and Marco Pasi). This group seeks to reflect and further stimulate the current process — reflected in the recent creation of new teaching programs, international associations, journals, book series, and reference works — of professionalization and scholarly recognition of Western esotericism as a new area of research in the study of religion. For more information on the field, see the websites of the European Society for the Study of Western Esotericism (ESSWE, http://www.esswe.org), the Association for the Study of Esotericism (ASE, http://www.aseweb.org), and the Center for the History of Hermetic Philosophy and Related Currents at the University of Amsterdam (http://amsterdamhermetica.nl).

For the necxt meeting of the AAR in San Diego 2014, the Western esotericism group invites paper proposals on the following topics:

• Esotericism and imaginative narratives: Possible topics include but are not limited to mystical or initiatory rites presented as fiction, novels that deal extensively with the transmission of esoteric knowledge, and esotericism in popular culture and film. As always, the Group seeks papers from as wide a range of historical periods as possible.

• Western esotericism and ritual studies: We are interested in receiving proposals that focus on the way in which esoteric rituals can be related to nature, the environment, or ecological concerns (for a possible joint session with the Ritual Studies Group)

Please look for further information on how to submit directly in the AAR website (https://www.aarweb.org/annual-meeting/call-for-papers).The deadline for the submission of proposals is Monday, 3 March 2014.
Posted by Stichting OVN at 11:53 am No comments:

The board of the OVN has recently welcomed a new member: drs. Jimmy Koppen. He graduated as an historian and is currently working as a researcher at the Center for Academic and Secular Archives (CAVA), Free University Brussels - VUB. Koppen is also a member of the Interdisciplinary Research Group Freemasonry (FREE) and adjunct professor at Vesalius College Brussels. He regulary publishes on Freemasonry, secularism and freethought and political history of Belgium. Amongst his publications is a book on the actions of the Nazi regime against Freemasons ans Jews in occupied Belgium, 1940-1944 (Passer en Davidster) and The Economics of Providence. Management, finances and patrimony of religious orders and congregations in Europe, 1773-1930 (co-edited with Maarten Van Dijck, Jan De Maeyer and Jeffrey Tyssens). He also wrote the Dutch edition of Freemasons for Dummies, and has a personal blog on Freemasonry (in Dutch only).
Posted by Stichting OVN at 11:48 am No comments: