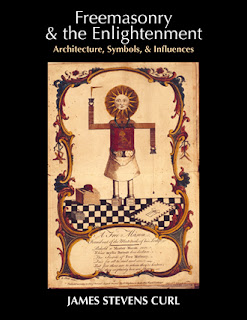 Freemasonry and architecture are closely connected. Professor James Stevens Curl is well known amongst scholars in the field of study for his publications on this subject. His latest book, Freemasonry & the Enlightenment. Architecture, Symbols & Influences, builds on his earlier research into this field.
Curl shows how freemasonry has not only influenced architecture, but also the design of parks, cemeteries, stage design and other parts of the designed environment. Readers who are new to the subject are offered introductory chapters on the nature and origins of freemasonry and the importance of Salomons temple as ‘the great prototype’, as well as glossary of terms. Colleagues in the field of study will especially appreciate the themed chapters providing an overview of symbols, their sources and application in various arts, as well as the extensive bibliography. The book has an encyclopedic feel, because of the many illustrations: all the well-known tracing boards and Masonic prints are there, followed by beautiful architectural designs which have built on these symbolic sources.
As professor Andrew Prescott notes in the Foreword to the book: ‘Professor Curl brings out, as nobody else has done before, the central aesthetic and architectural themes in the history of freemasonry: he masterfully illustrates how these, so intimately connected with the cultural significance of the Art of Architecture, are central and indispensible for our understanding of Freemasonry in the age of Enlightenment’. After an enjoyable read, this book will not remain on your bookshelf for long, it will be leafed through frequently as an important reference source.
Posted by Stichting OVN at 12:58 pm No comments: