Conference: The Expression of Freemasonry

The Chair for Freemasonry as an Intellectual Current and Socio-cultural European Phenomenon (The Leiden Institute of Religious Studies, Faculty of Humanities, Leiden University) has recently appointed music historian Malcolm Davies as its new professor. Professor Davies' inaugural lecture will take place on 25 November 2008 at the Leiden University. From September to December the chair will offer a series of lectures on the history of Dutch freemasonry for students, which is also open to other participants. The chair is also organizing an international conference on the theme of The Expression of Freemasonry: Its oratory, poetry, music, literature, art and architecture on 27-28 November 2008.

The event will be opened by drs. Diederik van Rossum, Grand Master of The Grand East of The Netherlands. Speakers are:

The conference has the support of masonic organizations, such as The Order of Freemasons under the Grand East of The Netherlands, The Dutch Masonic Study Fund (MSF), and The Cultural Masonic Centre ‘Prince Frederik’ (CMC), as well as academic organizations, including The Foundation for the Advancement of Academic Research into the History of Freemasonry in The Netherlands (OVN), The Leiden Institute for the Study of Religions (LISOR) and departments in other universities.

Costs (incl. coffee/lunch/reception): two days € 110,- (students € 45,-). Conference Location: The International School of The Hague, The Netherlands. For more information and registration: f.m.conference.leiden08@gmail.com
Posted by Stichting OVN at 7:27 pm No comments:

Future of the CMC 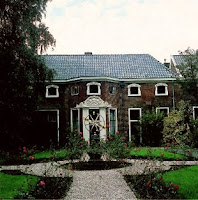 Earlier this year, the Order of Freemasons under the Grand East of the Netherlands announced plans to move its administrative headquarters and historical collections (library, archive and museum) to a ‘central location in the Netherlands’ by 2011. It invited the representative bodies of lodges in each province to submit a proposal for a ‘National Masonic Center’: a combined Freemason’s Hall, national headquarters and collection facility. The plan will have a significant impact on the future of the historical collections, currently housed in the Cultural Masonic Centre ‘Prins Frederik’ in The Hague (C.M.C.).

The Regio-Convent Den Haag (the body representing all lodges in and around The Hague) requested a formal advice on the future of the collections of the OVN foundation. The OVN provided a report, which underlined the great importance of these collections as cultural heritage on a national level, as well as a significant study collection on an international level.
The report was in places critical of the policies of the Order regarding the conservation, heritage management and public function of its collections, housed in the C.M.C. It further pointed out, that the collection had historically grown in The Hague since 1734, as the Order was founded here and remained closely tied to the Dutch Royal family and government, as well as numerous prominent historical figures and organizations based in this city. The collection is historically, physically and logically inextricably bound to The Hague. It forms a 'fitting puzzle piece' to the collections of the nearby National Library, National Archives, the Royal Family Archive and Museum Meermanno in The Hague, which all keep archives of historical figures and organizations which were involved in the Order. To move the C.M.C. to another location in another part of the country would 'rip' the collection from its historical and geographical context and sever ties with related collections and heritage organizations, but also move it further away from the Leiden University chair for the study of freemasonry.
The report proposed the development of a stable, long-term vision for professional heritage management, such as: cooperation with academic and professional heritage organizations; applying for heritage and cultural subsidies; realizing a more professional level of conservation and exploitation, as well as extending the public and academic function of the collections in the intended National Masonic Centre. In order to do so, the collections could be housed separately from the Order's headquarters and lodge rooms and form an independent organizational unit. A strong plea was made to re-examine the relocation plans, as the available options in The Hague (such as remaining in the current location, acquiring other accommodation in The Hague, or even sharing accommodation with nearby heritage institutions and university collections) have not been considered.

The Regio-Convent Den Haag carefully considered the report. However, it decided not to present a relocation plan, but instead made a strong plea for postponement of the plan. Unfortunately, this plea was rejected at the yearly meeting of the Grand Lodge and its lodges in June 2008. Of the proposals of other provinces, the plans for relocation to Bilthoven or Arnhem will now be discussed in more detail at next year's meeting, implying the loss of the collections for The Hague.
Scholars in the field of study are alarmed and concerned about these events. Most of the voting lodge members are unfamiliar with the history and contents of the collection, as well as the complex factors involved in heritage conservation and collection management. Although the decision process is democratic and the decision about a private collection obviously lies with its owners, the future of unique and important national heritage is at stake here. One would expect heritage organizations or deparments to have been involved as external advisors at an early stage of any relocation plans of a collection of this size and international importance.
Hopefully, other options will be considered before a final decision is made in June 2009. As several other Dutch masonic Orders have indicated that they are considering new plans for their historical collections, the OVN foundation is calling for a joint effort to form a professional heritage centre in The Hague.
Posted by Stichting OVN at 9:33 pm No comments: 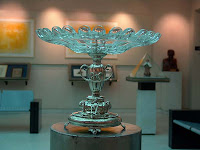 The website of the Musée de la Grande Loge de France lists several recent aquisitions. One of those caught the attention of Dutch researchers: a large cup, dating from 1872. It was a gift of lodge Het Vrij Geweeten in Breda, the Netherlands, to its Worshipful Master P.J. Six, celebrating his rule of 20 years as Master of the Lodge. It is described in lodge archives as a 'milieu de table', made of silver and crystal, decorated with heraldic and masonic emblems and an inscription. 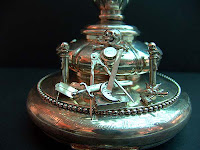 This appears to have been one of the many possessions of Dutch lodges, which were looted by occupying forces during World War II. Many objects of masonic silver were melted at the time, but this must have travelled through Europe instead, passing from owner to owner. Luckily, the object ended up in a masonic museum, where it can now be viewed and studied. But to the Dutch lodge, it remains a 'missing' part of its heritage.
Posted by Stichting OVN at 8:17 pm No comments:

The European Society for the Study of Western Esotericism (ESSWE) is introducing a PhD Thesis Prize. Nominations are invited for the first biennial ESSWE PhD Thesis prize, awarded by the board of ESSWE. The prize will be given for an outstanding European PhD thesis completed between 1 January 2007 and 1 March 2009 on any aspect of Western Esotericism (broadly conceived), which means studies of the history of freemasonry could also be considered. See the ESSWE site for more information.
Posted by Stichting OVN at 8:13 pm No comments:

Vrijmetselarij in Mechelen - Over meer dan 200 jaar vrijmetselarij in onze regio, until 19 October 2008, VOC Mechelen, Belgium. This small exhibition on 200 years of local freemasonry was made possible by contributions by Musée Belge de la Franc-maçonnerie, the Liberaal Archief, MADOC, the Municipal Archive of Mechelen and several local lodges.

(Thanks to Jimmy Koppen for the info)
Posted by Stichting OVN at 8:01 pm No comments:

Some scholars think that women first got involved in freemasonry at the end of the 19th century, as a result of the emancipation movement. This is incorrect: women have been structurally part of the masonic enterprise from at least the middle of the 18th century. Yet, little is known about the ways in which they themselves obtained and exercised power to influence the systems they were involved in, in order to adapt them to be more appropriate to their needs.
A new study, which will shed new light on the role of women in freemasonry is co-edited by OVN board member Jan Snoek. The publication concentrates on two aspects: Women’s agency (i.e. the power women gained and exercised in this context) and rituals (i.e. the role of men and women in changing and shaping the rituals women work with). These two aspects are closely related, since it requires some agency to realise changes in existing rituals. The number of Dutch contributions is relatively large, as the table of contents shows:

This book provides new insights into the development of freemasonry, the historiography of which has until concentrated on masculine orders. As such it is well worth the investment.

In 2006 the OVN published Symbolism in 18th Century Gardens. The Influence of Intellectual and Esoteric Currents, such as Freemasonry (ISBN 9080777838) after a conference on the subject in the masonic garden at Schwetzingen in 2006. Scholars working on related topics may be interested in a new study of the masonic symbolism in Parc Monceau in Paris and the garden at Louisenlund in Güby has been pub: Franz Wegener, Der Freimaurergarten. Die geheimen Gärten der Freimaurer des 18. Jahrhunderts, KFVR - Kulturförderverein Ruhrgebiet e.V., Gladbeck 2008, ISBN : 978-3-931300-22-7, 224 pages, € 24,80.

There are many fraternal organizations related to freemasonry, the history of which still needs to be described. OVN board member Jan Snoek has recently documented the history of the Independent United Order of Mechanics, an organization which may be new to many readers of this blog. Snoek concludes that the rituals of this Order are closely linked to masonic rituals, and - although the oldest known document of the Order dates from 1833 - that its roots lie in the 18th century (in accordance to oral history, which tells of its foundation in 1757): Jan A.M. Snoek, Ritual Dynamics in the Independent United Order of Mechanics, (Forum Ritualdynamik. Diskussionsbeiträge des SFB 619 Ritualdynamik der Ruprecht - KarlsUniversität Heidelberg) to be published end 2008.

Despite of the obvious language barrier, two Dutch publications deserve to be mentioned here, as they touch upon topics and persons which are relevant to scholars in other countries: