- Austrian researcher Eugen Semrau has published Erleuchtung und Verblendung. Einflüsse esoterischen Gedankenguts auf die Entwicklung der Wiener Moderne. The book describes the Viennese modernism in art and culture around 1900, with Vienna as the centre of the 'revolution of the mind'. The book contains chapters on the development of 'alternative thinking' in Europe, 'naional' esotericism and the relation between western esotericism, freemasonry and religion.

- John Belton's new oublication, The English Masonic Union of 1813, describes the issues and personalities involved in the bringing together of the Antients and the Moderns in 1813, in order to form the United Grand Lodge of England. Belton offers new perspectives on this important event in the history of British freemasonry. 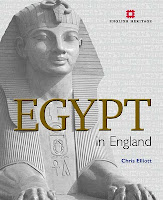 -The exhibition Egypt in England (The Quadriga Gallery, Wellington Arch, London, 7 November 2012 until 13 January 2013) shows the cultural influence of ancient Egypt, from the Regency period to the Art Deco interiors of cinemas. The exhibition is based on a new book by Chris Elliot, which contains a chapter titled 'Freemasonry: Wisdom from the East and the Pharaohs Apron'.
Posted by Stichting OVN at 6:47 pm No comments: